Imagine riding a bus for an hour to get to a supermarket to buy fresh fresh fruit and vegetables. This happens in the low income centers of a number of American cities and is called a food desert.  A few years ago, Waterloo Region Public Health and Foodlink tried out a pilot project that located temporary farmers’ markets in various neighbourhoods, many low income, throughout 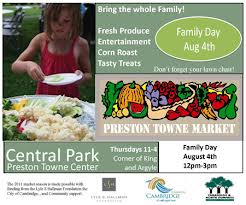 Waterloo Region. The ones at St. Mary’s hospital and the Preston Towne Square come to mind. The pilots were not continued for various reasons, except for the market at Preston Towne Square which has grown in popularity over the years. It should be noted that supermarkets do exist in Preston, it is not a food desert.

Which leads to the interesting NEWPATH report on Diet and Food Environment Findings presented at Community Services yesterday. The Region participated in a project from three universities that analyzed 1,334 retail food establishments and 1,170 individuals from 690 households in Waterloo Region in 2009.

People kept two day food diaries and the researchers  looked at what kind of food establishments were near the individuals. The study participants had a range of income, walkability from their home and number of occupants. They reported their weight, height and waist circumference.

The study found that the availability of healthy versus unhealthy food influences our eating behaviors and and health outcomes. An extremely small proportion of residents in Waterloo Region eat a good diet, .3%. The percent for Canada is .5% so we are slightly worse. But everyone is truly bad! No wonder overweight and obesity is an epidemic.

The researchers found that the vegetables and fruit in Regional retail food establishments are of excellent quality and that Cambridge, Kitchener and Waterloo, rather than gaps in access to healthy food (food desserts), have an overabundance of unhealthy food and beverages (food swamps). We are swamped with bad food and beverages.

Within one kilometre of study participants’homes:

There were five times as many convenience stores and fast food outlets as grocery stores and specialty stores.

There was over three times as much shelf space dedicated to energy dense snack food (chips and candy for instance) as compared to shelf space for vegetables and fruit.

Convenience stores were on average 521 meters away, fast food outlets 582m and grocery stores 1001m away.

Food stores with fruits and veggies close in price to junk food had less fat people living nearby. Those who shop at health and specialty stores were less impacted by price.

The study showed that in Waterloo Region, people do have access to healthy food and we do not have food deserts. However the results of the study suggest that exposure to unhealthy food is associated with poor diet. Also if healthy foods are priced the same or lower than unhealthy foods, they are likely to be purchased.  The current environment in the region is a food swamp, an overabundance of poor nutritional choices.

What can we do?

It is a strange thing to purchase medications to control obesity induced diseases then walk down an aisle filled with junk food and beverages to visit a cashier surrounded by chocolate bars for sale. Pharmacies gave up cigarettes, shouldn’t they also think about the selling of junk food? Parents across the region would thank our stores for removing junk food from the check out area.

Public Health will explore improving the affordability of healthy food and  beverages with such ideas as zoning by-laws, recreation centres, and healthy corner stores.

The City of Waterloo has a Thursday evening market in Uptown that has become quite successful and of course bargains are to be had at the St. Jacob’s 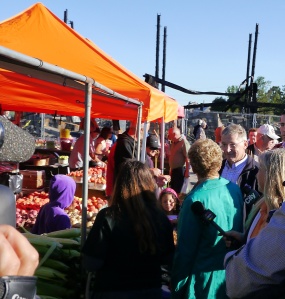 Market, Cambridge Market, Elmira Market, Kitchener Market and Preston Market (and how lucky we are to have these permanent farmers’ markets!) The City of Waterloo has just passed revised licensing by-laws and farmers’ markets are under flea markets with licenses valid at a particular location for 90 days on private property and 6 months on city property, and require public health approval. (Thanks Councillor Jeff Henry for this info)

The Waterloo Region Food System Roundtable is asking municipal candidates their opinion on zoning for temporary farmers’markets. The Roundtable wants broad zoning so the markets can pop up anywhere. Some candidates have privately told me they wonder if that is too broad. In any case, public meetings are coming up in the next year in Waterloo.

Temporary markets might help with locations for the strawberry trucks and corn sellers who park on the side of the road, sometimes causing traffic problems. Finally, after my questions in committee, Mary Ann Wasilka a citizen who was a delegation on another topic yesterday, sent me an interesting article about fruit and vegetable carts in New York city, basically pop-up vegetable stalls. They are for the poor in food deserts but they could be fun in the parking lots of our food swamps.

One response to “Food Deserts and Food Swamps”