continue with another of the ongoing series of e-mails I have sent from my travels of what we can learn from LRT systems around the world.

It is astounding the systems being built in rapidly developing countries and I would like to focus this time on the Istanbul, Turkey Light Rapid Transit network – an LRT that almost bridges two continents – Europe and Asia.  With one of the highest passenger loads in the world, the Istanbul LRT lines move hundreds of thousands of people every day as part of a larger integrated system of Bus, Bus Rapid Transit (BRT), Light Rail Transit (LRT), and Subways.
Istanbul has two older LRT lines built in the 1970’s very similar to Calgary’s C Train with high platform heights, dated rolling stock, and challenging stations.  They also have two newer LRT lines built just a few years ago using modern low-floor trains much more comparable to what we are planning for here in Waterloo Region.
The capacity of people moved daily on their LRT is astounding.  The new T1 route is 18km long with more than 100 Bombardier and Alstom LRT trains moving up to 320,000 people per day through a narrow, congested part of Istanbul that is over 2,000 years old.
Our construction challenges are nothing compared to the archaeological and engineering issues facing Istanbul.  This line travels within metres of the 1,600 year old Hagia Sofia – one of the grandest churches in the world and for almost 1,000 years the world’s largest cathedral, as well as within a few hundred meters of the famous 500 year old Blue Mosque (Sultan Ahmed Mosque).  Knox Presbyterian Church in Waterloo has nothing to worry about when one sees how the LRT in Istanbul navigates so close to these ancient world heritage sites.
The Istanbul LRT trains are often attached together in dual trains to double the length and capacity.  A peak times there is often as little as one or two minutes between trains as tens of thousands of people per hour move along this scenic line.  It is amazing to see how so many trains intermingle with thousands of tourists and pedestrians in the ancient core of the bustling city with few incidents or problems.
The system uses double-headed trains that can be driven from driver cabs at either end so there is no need to turn them around and similar to what is being planned for Waterloo they use fast, efficient paid station areas and proof of purchase ticketing so passengers can board at any door of the LRT.
The Istanbul system incorporates a lot of landscaping and greenery wherever possible – often creatively using trees, planters, and living fences to help guide traffic and pedestrians.  It reinforces the need for us to include as much greenery here in Waterloo as possible.

Below are a number of photos I took of their LRT system and ideas the Region should consider. 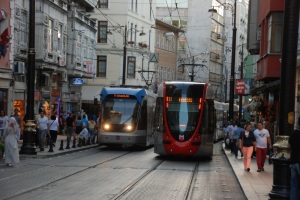 LRT’s pass each other in a busy residential and shopping district of Istanbul. 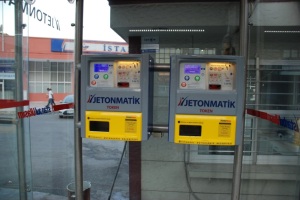 The automatic ticketing machines used by the transit network that take a variety of currencies and utilize a variety of different languages. 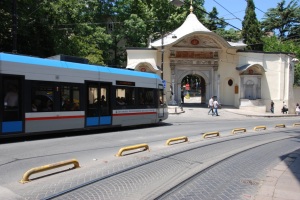 LRT passes the entrance to a park 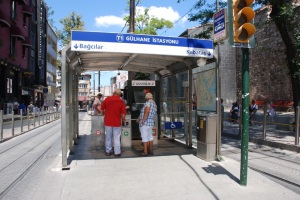 LRT passengers using their transit pass or token to go through the gates to gain access to the LRT station platform to catch the next train. 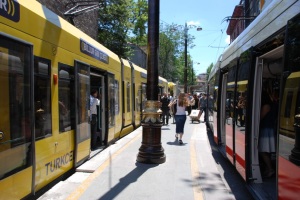 A station platform as two LRTs (one in each direction) simultaneously arrive. 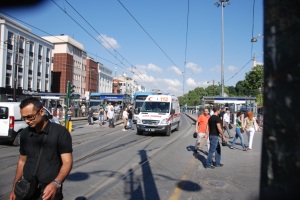 A Red Crescent Ambulance using the LRT track right of way for emergency access in Istanbul. 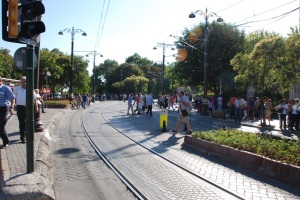 Huge tourist crowds not impeded by the LRT tracks in any way. 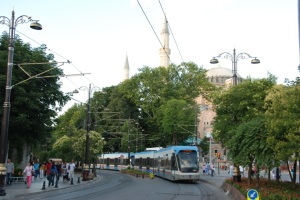 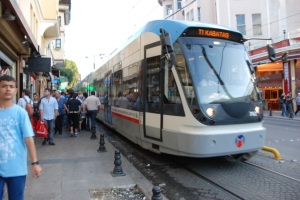 Crowds by the LRT. Nobody run over!