My pledge: I will support the work of the Economic Development Corporation and the programs in social services  and the college that help workers upgrade their skills

When I did my first round of election calls, a retired couple talked to me about their son who they think will be moving to Alberta to work in the oil patch. They were sad that he had lost his job during the Great Recession and still can’t find anything  equivalent to what he earned at Kitchener Frame.

Waterloo Region has weathered the Recession in much better shape than the rest of Ontario due mostly to our high-tech industries. The manufacturing industry has not done as well. Kitchener Frame (Budds) and Schneiders are gone along with other large manufacturers. Yet according to the Workforce Planning Board of Waterloo, Wellington and Dufferin, 82 % of those who lost their job want to return to manufacturing.  The problem is a mismatch between the workers, many of whom don’t have high school diplomas, and the skills needed in modern manufacturing. It is difficult for them to upgrade their skills. This comes up many times at the Employment and Income Advisory Committee that I chair at the Region. 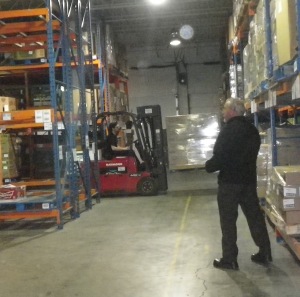 Training to be a fork lift operator

There are manufacturing jobs in Waterloo Region.  The Workforce Planning Board notes that 1 in 5 jobs in the Region is in manufacturing. But when even a labourer needs grade 12 to get a job, the problem is large.

The Region of Waterloo has a number of programs to help people get back into the workforce. When I toured the Foodbank last week, we saw young men being trained to be fork lift operators through a Regional program. Helps the food bank and the worker.

The main reason the provincial and federal government gave money to the Region was to provide jobs. 16,900 jobs will be created around the LRT/ION stations, everything from shops catering to the urban dwellers to high-tech start-ups. 4,000 local jobs will be created in the building and operating of the ION.

The Economic Development Corporation has been created so that all the Region’s cities and townships can speak with one voice when looking for new business to come to the region. It is an arm’s length corporation that will include Canada’s Technology Triangle. Arms length from local politics seems to work well in our Region. The Eastside lands in Cambridge are also being opened up with large parcels available for large plants.

The other problem for the Region is keeping and attracting skilled workers. These high-tech workers want  a city that is a great place to live, work and play. It means a vibrant cultural scene, good alternate transportation like walking, cycling and transit, and an urban environment coupled with rural recreation like hiking and canoeing, along with regular recreation. These new startups and workers need to be able to go to and from Toronto without being stuck on the 401. Go Transit is key.  We must also support the universities and Conestoga college and make Waterloo a welcoming place for students while understanding some of the concerns of other residents.

The Work Force Planning Board

Not in Support of the Living Wage Proposal

Here are some of my thoughts about yesterday’s “non-discussion” of the living wage.

The discussion is a good thing. It is a fact that needs to get out that people working in the service industries like food preparation, cleaning and landscaping are badly paid.

I voted against a deferral to the next council. I don’t want us to be a lame duck council for a whole year before the election. Lame duck is usually between the election and inauguration of the new council, after a new council elected. We still have a whole year of a mandate, it’s way too early to refer anything to a new council.

Why I’m against the living wage proposal.

For those of you unfamiliar with this discussion, Opportunites Waterloo Region asked council to give a living wage of a minimun of 13.23 per hour to all Regional employees. All Regional employees already earn over that amount except for contracted out services such as cleaners or student help.

For some reason, I can’t copy and paste Regional addresses today, so go to the Region website, www.region.waterloo.on.ca, click on government, then council committee agendas and minutes, then community services, then finally, the word, “here” under January 5th for more information.

1. Next week we finalize our budget and councillors will be looking at  new issues that effect the poor. Some councillors have suggested that we shouldn’t move ahead with any new issues, no matter how worthy, yet they support the livng wage. For us to approve higher salaries for people working for the region then not approve for instance, the money needed to keep daycare levels for poor parents at the same level or not approve an increase in reduced bus passes for all the poor( which is a issue paper  presently not recommended) just doesn’t fly for me.

Delegation by a poor person said,  The wages would go up for about two hundred individuals but this would definitely bring high cost of living for everyone else and so those living poverty would actually be hit harder.”

Actually not a big increase about .2 percent increase which is about two or three dollars per year in a rough estimate.

2 Minimum wage is a provincial matter and property taxes are the most regressive tax. For instance a retiree in Waterloo in a modest home  will have their taxes go sky high because they are in an area of student housing, yet they may be poorer than the cleaner earning minimum wage.  Provincial and Federal taxes are based on income or consumption.

3.Struggling small businesses won’t be able to bid as easily or we will face a reduced pool of companies bidding on the contracts.  And presently, many businesses are struggling.

4 But my strongest reason for not supporting the living wage proposal is as follows:

It’s an awkward way to pay people. What staff proposed was using points for choosing a winning bid. This would lead to contractors who may  or may not pay a living wage, depending on the points of the tender.  Tenders can have points for many things, rather than a straight lowest bid. For example, amount of work doing for the region, local office, experience with work (these are usually tenders for wells, specialized work with biosolids, etc.)  The recommended option would have had 10 points for living wage among other requirements for the work as well as the lowest cost.

If council really felt strongly about a living wage for service workers, we would hire them directly. But we know that making service workers employees would mean unionization and much higher wages than the living wage.

I am leaning towards Light Rail Transit because it will create 23,000 permanent jobs around the stations. Not to mention the hundreds of jobs building and equiping the route. Many of the building jobs will be local, and we can hopefully use a Canadian company for the trains. That would be my preference.