Cookbook featuring Local Kids in the Kitchen a Hit 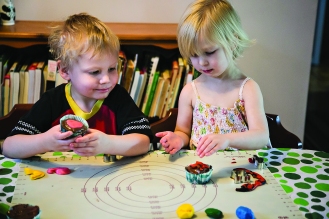 Who would have thunk it? A cookbook, featuring local kids whipping up their favourite recipes becoming a  Waterloo Region, Christmas season best seller?

Not so far-fetched as it seems, at least according to David Worsley, co-owner of Words Worth books in downtown Waterloo.

“The Giller Prize winner (Michael Redhill’s Bellevue Square)  and Goodnight Stories for Rebel Girls sold very well over the season,” says Worsley. “But Kids in the Kitchen: 80 Recipes by Kids, to Kids, for Kids came in a close third.”

Photographed with love and imagination by Kitchener’s Jennie Wiebe and New Hamburg’s Elisabeth Feryn, the book features over 80 kids, aged two years to nineteen in the kitchen creating their favourite recipes.

Ranging from breakfast fare, such as Baked Ham in Egg Cups to after-school snacks such as granola Bars; from soups and salads to favourite main courses like Mini-Personal Pizzas, the book was the brainchild of local writer Nancy Silcox.

“The book started out as a little fun project that I could do with my three granddaughters,” says Silcox. “Then it grew and grew as people asked if their kids could take part.”

Silcox was delighted with the response and had only one ground rule for the participants. “The recipes had to be kids’ favourites. No adults involved.”

Aiming for an international feel too, Silcox invited kids outside Canada to join in. From Italy came Spaghetti Carbonara; from Uganda came Juma’s Samosas and from Columbia,  Arroz de Leche (Rice Pudding.)

Food sensitivities were considered too in Silcox’s book. Waterloo Region Councillor Jane Mitchell’s grandchildren Mary and Robert made for “Kids in the Kitchen” Vegan, Gluten-Free Chocolate Cupcakes. Clarissa’s Tuna Surprize and other pasta dishes are easily adaptable with rice noodles

With the recipes pouring into Silcox’s computer came food riddles: “what’s the only type of bean that doesn’t grow in the garden? A jelly bean;” food jokes “why did the tomato blush? Because it saw the salad dressing” and colourful art work.

Paired with Wiebe and Feryn’s top-notch photography, by the time the book was complete, 90 recipes and dozens of full-colour “extras”  were showcased.

Launched at the Baden Hotel on October 1 with a “standing room only” crowd in attendance, “Kids in the Kitchen” was an immediate hit.

“I’m guessing that hundreds of the books were opened on Christmas Day,” says Silcox.

As the New Year of 2018 opens, the little book that grew and grew keeps on giving.  All sales of the book are passed on to two local charities: Nutrition for Learning and Dreamshare for Uganda. Close to $15,000 has been raised for these charities to this point.

Copies of “Kids in the Kitchen” are available at Words Worth Book in Waterloo. “But don’t wait too long,” laughs Silcox. “They have a habit of disappearing quickly.”

A Meat Eater Goes Vegan for a Week

Peter Thurley loves meat. If you don’t understand that, the rest of this post won’t mean a thing. He also loves his new job at the Children’s Foundation which supports Food and Friends a children’s nutrition and breakfast program that funds 80 programs in Wellington, Dufferin, and Guelph.

I challenged him to go vegan for a week, giving up milk, eggs and meat for 7 days. I would give him 10 dollars for everyday he can do it. Peter picked my challenge, knowing that as a meat eater this would be very hard for him but would also remind him of the kids whose only food in a day might be the breakfast of a nutrition program.

Along with the members of my church, All Saints Anglican, I am a volunteer at the Cedarbrae breakfast club and have not only served hot breakfasts but also made up bagels and veggies for kids who do not have a lunch either. I am also going to give 70 dollars to Nutrition for Learning, our Waterloo Region breakfast program.

So why vegan?  My oldest daughter has been a vegetarian for many years. Lately, I have been trying to get my eating into some kind of sensible order and I have also discovered I am very lactose intolerant. I am not vegan but I do eat less meat, fish and eggs. It is also amazing how many products have milk products, particularly whey in them! I can still eat a bit of certain cheeses, but not too much!

What I hope Peter, who is a blogger and tweeter, will learn from this exercise is what a shock it is when you begin to read packaged food and fast food labels. I don’t expect he will become a vegan. It’s a pretty hard row to hoe unless you are dedicated or it is your religion.

But there is a world of great meatless meals out there. So far he’s just eating the veggies so must be pretty hungry. I am making up a care package of yummy vegan meals for his wife and him this week-end.

Update! Here is the Live Free Waterloo Region that I will be donating to as well. http://www.livefreewaterloo.ca/   Thanks Kathi Smith for this info. Kathi is going meatless until the end of March for Live Free Waterloo

For more about vegans, Google has a good range of recipe sites. (Most vegetarians use vegan recipes otherwise you get a life of constant cheese)Toronto Vegetarians website is fixed. Here is their veggie challenge. http://veg.ca/content/view/26/56/