City Comes to the Country: Problems for Erbsville Village 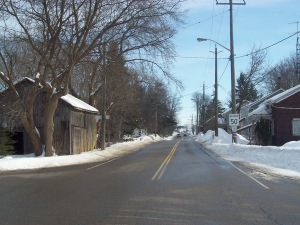 of what has turned out to be an interesting three parter  looking at a new arterial road and suburban growth . On their brand new website, the residents state, “Erbsville is an old village (over 100 years old) that has been swallowed up by the City of Waterloo.  As development in Waterloo has accelerated all around Erbsville, the pressures of the city are being felt in this village designed and laid out originally for horse-drawn traffic. ”

The suburbs of Waterloo are marching up to Erbsville from the south and east. Fortunately, the Environmentally Sensitive Landscapes and the Countryside line are to the North and West.

This rural village is now plagued by heavy traffic in the rush hour as parents take their kids to Sir John A Mac Donald highschool or people drive to their jobs at the universities and high-tech firms.

Gravel trucks heading to the new plaza and housing developments rumble through the village as do transport trucks carrying goods to the new supermarket and stores down the road. The tractor trailers take a short cut from the expressway, across Benjamin Road and Conservation drive to cut through the village and onto Erbsville Road.

An Early Years Centre for at home caregivers, Moms, infants and toddlers is located in the old public school that was closed around 15 years ago. The women, children and strollers coming from the new subdivisions must walk along the side of a road without a sidewalk as trucks whiz by them.

Here are some pictures taken by the residents of their problems.

The intersection of Conservation Dr. and Erbsville Road has a hanging flashing red light with a yellow caution for Erbsville Rd. Runners and cyclists cross at this point.

Snow removal is a particular sore point with the residents as the bike lanes/paved shoulders are not cleaned and they take the place of sidewalks.The houses are close to the narrow road and this makes snow clearing by the city difficult. Often the city or region has to be reminded to clear the snow and if just a plow comes down the road there is no place to put the snow.

One property in the village has been zoned for 29 estate lots, which means more traffic and problems. While the McNally lands nearby will be left natural, a Christmas tree farm is rezoned for suburbs. Things can only get worse for the village.

They held a meeting last week but many politicians were unable to come due to another event conflicting. Some have met with the residents separately. Kathleen Woodcock from the school board will tell the school buses to slow down in the village and I have contacted the Waterloo detachment of the police to ask for a radar sweep.

These are only band-aid solutions. After the election, city and regional staff, politicians and the residents must get together to find solutions for this small village being swallowed by sprawl. We need to look at everything from a heritage designation to sidewalks to a roundabout to a by-pass.